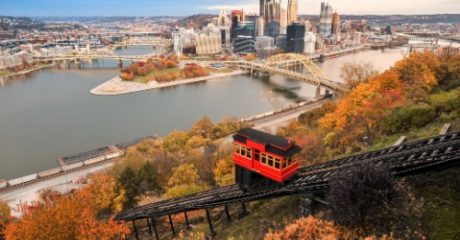 Pittsburgh is synonymous with steel. The alloy literally built the town. Throughout the 19th and 20th centuries, Pittsburgh was a hub for all things steel and iron. Families like the Carnegies, and the Fricks, made their fortunes as the little town at the confluence of the three rivers grew and grew. However, steel isn’t the only product to come out of Pittsburgh. In fact, Pittsburgh’s manufacturing history goes back much further.

Long before the Bessemer Process was even patented, Pittsburgh was known for its boat building. Following the Revolutionary War, Pittsburgh began to shift away from its roots as an agricultural hub. Taking advantage of all the waterfront property, many early entrepreneurs settled on building boats that could traverse America’s mighty, yet still unexplored rivers like the Ohio, Mississippi and Missouri.

Remember, in the late 18th century, Pittsburgh was pretty much considered America’s frontier. If the country was going to expand, it needed a way to move goods westward. The boat building industry in Pittsburgh was so successful, that by beginning of the 1800s, the shipyards were building boats capable of sailing to Europe.

If you’ve ever traveled through Downtown Pittsburgh, also known as the Golden Triangle, you’ve probably seen the shining glass building with the spires. This is PPG Place. Its shimmering facade stands as a monument to one of Pittsburgh’s oldest industries—glassmaking. Dating all the way back to 1797, Pittsburgh established itself as the center of the glassmaking world. In fact, by the 1920s, almost 80% of all glass in America came out of Pittsburgh.

Once a craftsman’s trade, automating the glass industry is one of the Pittsburgh area’s greatest legacies to modern manufacturing. With the Appalachian mountains and rivers providing all the raw materials, factories popped up along the Ohio river throughout the region. Although production has slowed in the last fifty years, the glass industry still maintains a presence in Pittsburgh today.

Although the manufacturing industries of the 19th and 20th centuries have fallen by the wayside, Pittsburgh remains a leader in many manufacturing sectors. PPF and U.S. Steel still maintain company headquarters in Pittsburgh, as does the food and condiment giant, Kraft Heinz. Pittsburgh also has a large presence in robotics, medical, and electrical manufacturing.

No matter the product, steel or otherwise, Pittsburgh’s manufacturing tradition is as old as the city itself. Custom Tool wants to help your business carry on that legacy. Request a quote today to make sure you have the right tool for the job.