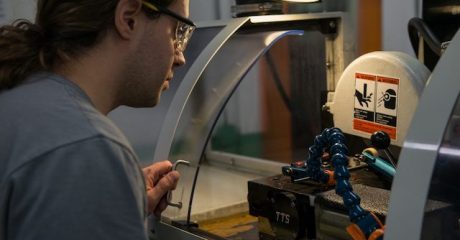 Are you thinking about regrinding? If your tools have become dulled and are no longer as effective as they once were, rather than replacing them you can simply get them reground. Regrinding tools have a lot of benefits, especially when done through a company that provides fast, trustworthy, and reliable servicing.

Regrinding a tool can save you substantial amounts of money. The cost of regrinding a tool is a fraction of the cost associated with replacing it entirely. As long as tools are reground on a regular basis, you can have like new tools all the time without the additional cost of purchasing or upgrading. There are many custom tools that need to be special ordered or that cost quite a lot to replace. Over time, many people can also become attached to their tools; you may feel more comfortable working with a reground tool than an expensive new one.

Regrinding your tools on a regular basis will create a safer working environment for everyone involved. And though it’s possible to sharpen dull tools on your own, it’s often not possible to regrind specialized tools that may have grooves, notches, indents, and other features.

Everyone’s struggled with an old, worn tool at some point or another. Regrinding your tools doesn’t just make them safer; it also makes them more effective. By regrinding your tools you can often reduce the amount of cost that’s spent on your production, repairs, and manufacturing. Depending on the number of tools that are reground, you could drastically improve the efficiency of your organization for a single low maintenance cost. Safety improvements will additionally increase productivity as it will be easier to complete work without being injured.

Regrinding is nearly always a better solution for an organization than either repurchasing tools or struggling with old, dull, and worn tools. By incorporating regrinding into standard maintenance procedures, businesses can refine their processes and improve their productivity. CT&G can customize and regrind virtually any tool in any quantity. Whether you have a single tool that you need reground or thousands of custom tools that you need to purchase, CT&G can deliver you a no-obligation quote. Contact CT&G today to learn more about their custom tool capabilities.