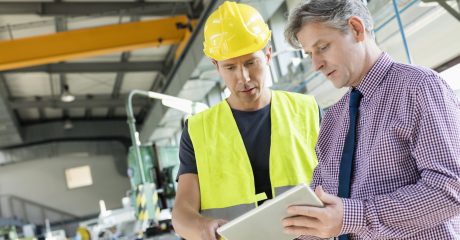 Happy Labor Day, folks! Labor Day is all about the workforce, so the holiday makes us wonder about the start of manufacturing in this country. There was a time where products were mostly made at home, or in nearby homes. It wasn’t until 1790 that the first factory was built on American soil. Let’s take a closer look at American manufacturing.

Samuel Slater came to America as a spinster’s apprentice. He built the first U.S. factory based on his memory of textile factories in England. It made yarn from spindles powered by foot pedals, which were operated by children. My, how times have changed!

Given this and the multitude of other factories that Slater built with his sons, he is often considered the “Father of the American Factory System.” However, he was significantly less popular in Britain, where residents labeled him a traitor for bringing trade secrets to America. From our perspective, it’s hard to know where the Industrial Revolution would have gone without him.

There were many things invented elsewhere that were actually perfected in America. You may know Eli Whitney as the inventor of the cotton gin, but he had two other industrial advances that had more of an impact on the American factory. We have Whitney to thank for the commercialized concept of using interchangeable parts, as well as the invention of the milling machine.

Interchangeable parts were pursued in Europe before Whitney began trying to introduce them in the U.S. For his part, Whitney he promoted the idea and essentially “sold” the concept to the U.S. government, getting the contract for manufacture guns in this manner before having the ability to make them. Luckily, the buy in on the idea and the actual contract for pursuing the project enabled him to realize his vision. He used what was the foundation for cost accounting and economic efficiency to land the contract, which further added to the growth of American manufacturing and industry.

Who can talk American innovation without mentioning Henry Ford? The Model T car had innumerable impacts on American manufacturing and industry, and his fast-moving assembly line production process really innovated the manufacturing industry. But Ford’s forward-thinking approach to the labor market revolutionized the working world. He paid his workers twice the average wage, and promoted a 40 hr/week schedule. This earned Ford employee loyalty and dedication, resulting in longer tenures with his company. Employees were able to strengthen their expertise by maintaining long-term positions, which simultaneously decreased the cost of onboarding and incorporating a new workforce.

Not every technological advancement is related directly to the factory floor. So many inventions impacted America’s ability to grow and embrace the Industrial Revolution. For instance, the steam engine enabled factories to transport products and materials farther and faster than ever before. Other examples? Consider telegraphs and typewriters.

American Samuel Morse is the primary figure behind the invention of the telegraph. The first U.S. telegraph service connected Baltimore and Washington D.C. This invention allowed American businesses to communicate faster and more effectively, as well as helped people to share and read the news from around the world.

The creation of the typewriter also helped forward manufacturing. This gave companies the ability to quickly and easily record typed manuals for their workers (Bonus: the print was easier to read), which could also now be made en mass. Looking back now, the typewriter may not seem all that fast and efficient, but it was a stepping stone to more modern technology. Besides, think of the SOPs in your shop. Can you imagine the whole thing being written out by hand? No thank you!

Get the Most Efficient Tools at Custom Tool

We may not have been around since the Industrial Revolution, but we’ve got plenty of years of experience and skills here at Custom Tool. We draw on the tradition of excellence and service that has been part of the metalworking heartland of America since the dawn of U.S. manufacturing. We can help you create the perfect tools you need to get the job done. Check us out online to see what we can do for you!