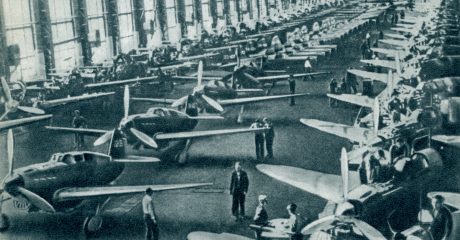 If not for the metal working industry, an Allied victory in World War II may never have come about. Machining for the military really had to step up its game to provide the needed tools and parts for wartime. Focus went from fulfilling consumer needs and goods to assist in protecting and arming our military overseas. With that rush to produce came an increased need for technology that made things faster, more precise, and less expensive.

Machining Advancements for War and Peacetime

The pressure of increased production in war times led to some great industry advancements that continued to benefit machining companies and the country for years to come. Cincinnati Milacron engineers helped improve a key component in warplanes. This was before the time of the jet-engines we know today. These planes had air-cooled gasoline engines. Due to the thickness of the aluminum cylinder head fins it was hard to provide adequate cooling. The mill’s engineers were able to create a machine which would mill the fins thinner than before. This enabled more warplanes to be able to fly faster and higher safely.

Another enhancement from the Cincinnati mill was an automatic profiler which made complex cams that would lock the mechanisms of bomber planes if they were not out of range of the plane itself. This helped to prevent a serious problem of these bombers inadvertently damaging their own wings and tail fins. Even once wartime was over the ability to mill thinner aluminum pieces and automate range continued to be useful in commercial products.

A Change of Focus for Machine Shops

When war was declared in 1941, the government became many machine shops’ only customer. Achieving production goals was no longer optional, it was a patriotic duty. You needed to produce more product, at a better accuracy and higher quality than ever before. The country depended on it. If a company didn’t have the production capacity required to meet the government’s demands then the government would build it for you.

Davenport Consolidated specialized in creating multi-spindle automatics. During the time of World War II the company produced 645 of its Model B machines, nearly all of which was purchased and used by the US military to generate precision parts of detonators, fuses, firing pins, and various other small parts at high speeds. The company had to increase building capacity to keep up with the demand of the military. Once the war was over, they took advantage of the increased capacity to design various attachments and editions to the original machine making useful  for various peace time consumer needs as well.

A Future for Machining in the Military

You may think with all the advance technology and artificial intelligence out there now that the military would have less use for industrial machining and manufacturing, but that’s not true. Additive and advanced manufacturing are being operationalized across the material enterprise in order to improve both equipment readiness and warfighter capabilities at a tactical level.

The movement of Industry 4.0 and the merging of artificial intelligence aids such as robots and advanced machining, with traditional manufacturing  creates a more agile and adaptive future in military and defense machining.

Custom Tool is Here for All Your Manufacturing Needs

Whether your machines are saving the world or solving a few key problems at home, we’re here for you. Check out our website to learn more about what Custom Tool can do for you.